The Mayonnaise that Came in from the Cold

Moving always has its challenges. Along with divorce, marriage and pregnancy, this aspect of everyday life is fraught with stress and conflict. Ah, conflict! A word we all recognize in our search for writing tools. Without conflict, there is no story and certainly no point to the telling.

Humans grow and achieve, discover and innovate through conflict—the confronting and defeating of discouraging circumstances gives us opportunities to grow and achieve, find solutions and solve problems. Without conflict, testing or opposition, we tend to wallow in the marshmallow world of comfort zones.

When I moved earlier this year from the sunny shores to the high plains, I felt unnerved and insecure—out of my element. At the same time, excited and expectant of great things. Despite that trepidation and expectation, I was not prepared for the common realities of moving into an empty house with very little furnishings in my own possession.

One significant missing element was a refrigerator. The first few hours, the next day, were no problem. But with milk, yogurt, cream and mayonnaise in the picture, a cooler was the first choice because the fridge was scheduled for delivery in two weeks. While a cooler is fine on a picnic and great for the tailgate party, keeping the volatile mixture of raw eggs and oil at a safe temperature required much more than a bag of ice and a thin layer of Styrofoam. 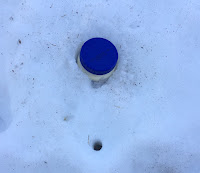 Lightbulb moment. This may be the high plains but there’s snow in the front yard. 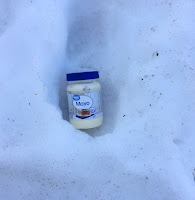 Lightbulb flickers. Going outside every time a sandwich was on order when the temperature had dropped to 4° below began to wear thin. But one of the beauties of living in a small city in the high plains in the mountainous Midwest are the people. We learned that our appliance was delayed another few weeks. I presented my case. The manager of the local appliance store has provided a brand new fridge as a loaner until the one purchased makes its way to the empty space in my kitchen.

I've had dogs since I was young, and my husband and I have always had big dogs. When we adopted Sable in 2003, I got involved in our local animal shelter and served on the board. I learned a lot about the plights of dogs and cats and other animals who need homes. When Sable died in April (at age 14 1/2) we missed her a lot. People said to us, since your kids are grown, why get another dog? But we couldn't imagine living without a dog. So in September, after our vacation, we adopted a hound-mix and named him Rawhide (after the old TV show). He's rambunctious but also very sweet! Many of my traditional romances have included dogs. But I am aware of how many cats need homes so I thought I would include a cat in my newest traditional romance, "Setting the Stage for Love." Tiger plays an important part in this story! 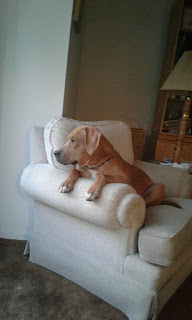 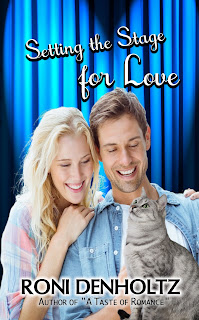 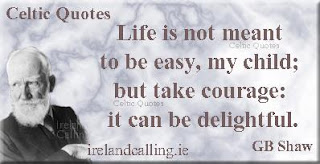 With St. Patrick's Day just a few days away, it seems appropriate to share a little Irish wisdom and this quote from that rascally Irishman George Bernard Shaw is about as wise anything as anything I can think of.

I'm pretty sure most will agree that life is not always easy, but we might not agree that it is not meant to be easy. I like to think that the universe is a beneficent place that wishes all its inhabits to be happy and, actually, that's pretty much how I see it. But I also believe the universe intends for us to be all that we can be. It wants us to grow and to be ourselves beneficent. Would that be possible if life were always easy? I doubt it.

How could we grow if we never had to work our way through life's uneasy patches? How could we learn to be beneficent if we did not need beneficence ourselves? That's where those uneasy patches come in. We need to be humbled every now and then before we understand that it's not ease the world needs, but kindness and forgiveness. How does the universe teach us those things?

It puts rocks in our paths. We stumble. Our courage is tested. Someone stretches out a hand and helps us up. We're grateful. It's good to be back on our feet. There's another side, though. We're humbled. As good as it is to be upright again, we really wish we hadn't had to depend on someone else. It's not easy to accept help. We're tempted to feel the tiniest bit sorry for ourselves. Then someone else stumbles. We help them up. It feels good to know that we've helped someone. We're proud, maybe so proud that our hard-learned humility gets pushed into the background. Big mistake, because we're sure to stumble again. And need to be helped up again. And be humbled again. And be given another opportunity to extend a hand to stumbling humanity. And so it goes.

This ebb and flow of stumbling and falling, needing a hand and extending a hand, continues - and we grow. We even learn to value humility. We come to understand that both sides of helping and being helped are gifts. Accepting becomes part of the cycle of giving. Humility becomes part of courage. The universe is better, more beneficent, when we allow ourselves to accept help.

So, as Mr. Shaw advises, take courage, my child, work your way through those uneasy patches, accept help when you need it, and never pass up a chance to help someone else. It's all part of life, which Mr. Shaw so wisely described as "delightful".

I hope you all have a delightful St. Patrick's Day.
Posted by Sandy Cody at 2:00 AM 8 comments:

A Few Hours Without Cable and Internet – Arggh!

A few days ago my cable television service went out and took the Internet service down with it.

Fortunately it was only for a few hours, but those few hours seemed like forever.

When did I get so dependent on that cable linking me to the rest of the world? 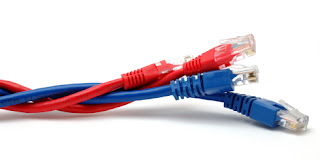 I remember a time when television was delivered via the antenna on the roof of the house. Admittedly it could be finicky. Sometimes you got nothing but static. Choices were limited to a few stations. But it usually worked to some degree.

There was a time before the Internet as well. A time when I could work, read, and generally go about the day without having to check in on email constantly or rely on that connection to get things done.

That time is no more. Having it out for just a few hours was incredibly frustrating. Admittedly, I’m a web designer so I probably rely on that connection to do my job more than most people. Or maybe not. My daughter uses her home computer to log in and get work done when bad weather prevents her from getting to office. My son works from home. Others in the family do extensive research with it.

Things I realized I couldn’t easily do with the Internet down: update a couple of websites that needed some changes, pay bills, check the location of a shipping place, answer emails from family and friends, buy a book I wanted for my Kindle, look at the upcoming weather forecast, and check in for a flight I would be taking the next day.

All of those things can be done in other, less convenient, more time-consuming ways. But I’ve gotten used to doing all of them from the convenience of my office desk via the computer.

Just as we used to watch a limited array of television offerings with sometimes grainy pictures. I’ve now grown accustomed to being able to choose from a wide variety of programming options. Throw in my Netflix subscription and it’s almost unlimited. I get to watch pretty much any sporting event I want.

I’m soft and I’m spoiled.  I’ve gone all in for convenience and choice. The result is that I can be nearly paralyzed by an internet outage. Good trade-off? I don’t know. It’s just the way things are now.

Posted by Karen McCullough at 1:04 AM 2 comments:

I think we all agree we live in a sex-saturated society. Everywhere we turn there is sex - social media, movies and television, books, even advertising. Yes, we all know sex is used to sell everything from coffee filters to motorcycles and just about anything you can think of in between.

These days it's difficult to find books or movies that don't drip with explicit, graphic and sometimes gratuitous sex, but it is possible. The writers of this blog write what some call 'clean' books that don't have excessive sex or violence... but be careful of saying that. The word 'clean' is a trigger for lots of writers and maybe even some readers, especially those who like their reading explicit. It implies, they say, that sex is inherently 'dirty.'

Well, that argument is way above my pay grade! Besides, what constitutes 'sex' is really a very grey area, open to all manner of interpretations. To some readers, a kiss before an engagement is salacious, while to some others getting to know the other person's name before the characters have sex is not really necessary. Most readers - and writers - fall somewhere in between.

So as writers what do we do about sex? Ignore it? Allude to it? Something else? There are those who say that sex is an integral component of romance and of life itself, and that to ignore it is dishonest. There are also those who say that some things should be private, and not everyone regards premarital sex or even descriptions of marital sex as an indispensable part of romance. And many mystery readers believe that sex - except perhaps as a motive - has any place whatsoever in a mystery.

What's a poor writer to do?

First, we must accept that whatever we do there are some people who won't be happy about it. Second, we must always remember that it's our story and our people, and what they do is at our decision and command.

There are all kinds of options open to us. We can write a story where sex is not only not mentioned, it's never even thought of. We can write a story where a couple (married or unmarried) have sex, but it's most definitely off-screen, with nothing but the most careful allusion to it having happened. Some writers get so graphic in their descriptions of The Act that it might as well be advertised as an instructional manual.