Many years ago, my mother travelled with a group from her church to England. On this trip, she visited the birthplace of John Wesley, the founder of the Wesleyan denomination of the Protestant Methodist Church. When she returned, she gave me a few packets of seeds from the shop associated with the site.
Although I was still a student, I had a small garden in my rented suburban house, in which I grew a few flowers, the proverbial and ubiquitous tomatoes as well as a six-foot by ten-foot lawn. I made every effort to plant and grow the seeds but without success. Instead, in an attempt at atonement, I wrote a short story, “John Wesley’s Hollyhocks,” and included it in my Master of Arts Degree thesis in Creative Writing. The opening paragraph begins:
Mrs. Fortinbrough approached the ground, all her weight braced heavily against the brick border of the flowerbed and, stroking the fine, new shoots, raised her face to the window. The girl let the curtain fall back over the window and disappeared. Her daughter was no more interested in this season’s hollyhocks than she was interested in going to church….
This is a story about the relationship between an adolescent daughter and her mother. As we can all imagine and is indicated by the closure of the curtain, the relationship is strained at this stage. Happily, my actual relationship with my mother, though frequently contentious—as is any interpersonal interaction—was healthy and positive. Her passing has not lessened my love for and dependence on her wisdom. 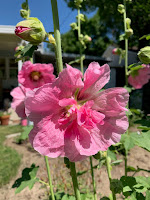 This year, for the first time in nearly thirty years, I have a garden which has eventually proved to be responsive to hollyhock propagation. When I first planted the seeds, directly into the soil in the spring of 2018 with absolutely no response, the letdown was palpable. The soil in these high desert plains is river-bottom clay—as hard as rock when it’s dry. This spring, I started hollyhocks and delphinium among other varieties in the proper potting soil in seedling pots.
I then prepared an area of the garden with compost and other organic material. When I transplanted the seedlings, I had to protect the young plants from the wild rabbits with plastic collars. Once the hollyhocks began to grow above where the bunnies could reach the leaves, the plants flourished. 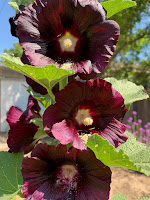 In many ways, I equate gardening with writing. Persistence is the key to success. As Steven Pressfield remarks in his writers’ guide, The War of Art, procrastination is a form of resistance. Persistence and perseverance get results, just as Mrs. Fortinbrough will get results with her daughter:
…Just as the hollyhocks had needed her care and discipline, so did the daughter. It was not too late for her roots to be tapped and the plant to grow straight again….

Posted by Leigh Verrill-Rhys at 12:03 AM