The Lake District in England 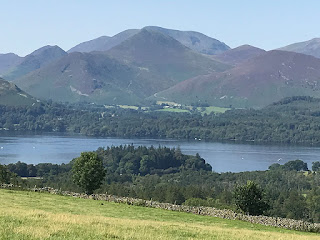 For years I’ve wanted to visit the Lake Country in England. The historical association with the romantic poets and the cultural connection to Beatrix Potter influenced that but the real decider for me is all the stories I’ve heard about the remarkable beauty of the area.


The region has been a go-to vacation spot for many English families for years, including my son’s in-laws, who are avid mountain-climbers.


I recently got the chance to visit when we arranged to spend a week in Keswick, one of the largest towns in the District. We shared a vacation cottage with our son, daughter-in-law, and their two children. The journey to the place was a fairly easy but rather long car ride from their home in Hythe, Kent.


For us, getting there meant taking planes from our home in Greensboro to Atlanta, from Atlanta to JFK in New York, and from New York to Glasgow. After a couple of days stop-over in Glasgow, we took a train to Penrith and then a bus from Penrith to Keswick.


Was it worth all the travel? From the purely personal perspective, a chance to visit my grandchildren is worth any amount of effort. But the countryside offered a lot of rewards as well.


The Lake District is actually an area of mountains, valleys, and rivers as well as many lakes. The scenery ranges from gorgeous to breathtaking. Mild weather and frequent rain ensure that the place is very green. It’s a playground for lovers of nature and the outdoors.


Although there are other entertainments, including a theater by the lake in Keswick, the place attracts mostly hikers, mountain climbers, bikers, boaters, and other water sports enthusiasts. The entire area is a warren of narrow roads, trails, and walking paths.


We had a beautiful view of a nearby mountain from the large window of our house and the deck overlooked a river. On our first full day we took what was billed as an easy hike to the Castlerigg Stone Circle, an ancient stone circle that lacks the size and grandeur of Stonehenge, but is more accessible and intriguing. The day was unusually sunny and hot, making the mostly uphill hike there more strenuous than expected. Still we managed it and an even longer downhill hike back to town.


Day two featured a boat trip around Derwentwater, one of the many lakes in the area, followed by some time in town, followed by lunch in a pub and poking around the town of Keswick. Day three also featured beautiful weather. While my daughter-in-law and oldest granddaughter climbed Catbells (a “beginner” mountain I wasn’t ready to tackle) the rest of us walked a mostly level trail along a lovely, winding river.


It’s worth noting that the landscape is also dotted with numerous small pubs and cafes. Most walks included breaks for refreshment at a café and ended with a meal in a pub.

Unfortunately during the last couple of days of our stay the weather deteriorated sharply. Rain isn’t unusual in the area. Our first few days, which featured sunny warm weather, were more of an anomaly. But the solid deluge and heavy wind of our final days were not the norm. On one of those final rainy days we all visited one of the most interesting non-outdoor activities in the area, the Derwent Pencil Museum. The pencil as we know it had its origin in the area and Derwent still makes some of the best quality pencils around.


The last day we stayed inside and played with the grandchildren. And that was good too. All things considered the trip was well worth all the travel involved.

Posted by Karen McCullough at 6:09 PM