by Fran McNabb
I’m excited to once again be back as a regular on Classic and Cozy taking the fourth Thursday of the month. If you follow the former Avalon authors on this group, you know that Leigh Verrill-Rys has filled this space for a long time. Like most of us on this blog, Leigh had to let go of some of her obligations to find time for other endeavors in her life. We’ve all been there. In fact, for the last year or so, I, too, stepped away from the blog to catch up with life, which brings me to the point: How do we know what is important in life?

As authors we all try to juggle the demands of living. Some of us might be raising children or grandchildren, some work full time, and all of us strive to enjoy life while still finding time to write. How does anyone find the time to do what is important to them?

I’m a retired teacher. When I worked, I seemed to be much more productive than I am now. How could that be? I was away from the house for over eight hours a day, had two boys who were active in school and in sports, and a husband who loved to fill our house with friends every weekend. Needless to say, life was interesting, yet I found time to write regularly. I think the key was time management and being organized. I had to write lesson plans, grade essays and tests, and most importantly, I had to be involved with my boys and their pastimes. And, yes, I had to write and I did.

Maybe because I was younger and had more energy, I was able to do everything, but besides that fact I think the key was making the decision that I wanted to be a published writer. After that decision, I carved out the time in my busy schedule. That time might have been four in the morning while the kids were still sleeping or in the middle of the night when I awoke with an idea. I’m not sure how I did it, but I’m sure determination played a big part.

Today I don’t work outside the home, but I seem to stay busy. Most things I do are not necessary, but they are things I want to do. I do want to write, but compared to my earlier years, I'm not as productive. So, back to my original point: How do we know what is important in life? That’s easy. No matter how old you are, family should come first. Their needs and wants are important, but then what we want to do should come next. If it’s finding time to write, then we should make sure that time is there. If it’s volunteering someplace, then find the time to do it. Wants are important. They are the things that keep life interesting and moving along.

So, Leigh, we all understand what you’re going through. I hope all of your life’s callings let you find time to write and to one day come back to Classic and Cozy.

Presently she has nine published light romances. Her latest book, A SOLDIER'S HONOR is also set on the coast. Come visit with Fran at www.FranMcNabb.com or contact her at mcnabbf@bellsouth.net

When Fact and Fantasy Merge

The last two posts here at Classic and Cozy, Victoria Johnson's February is for Fairy Tales and Janis Susan May's Fantasy, Myth and Formula, have been about fantasies and myths, in other words, writing that is rooted in our dreams, stories that stir our imaginations and help us to understand good and evil. I loved both posts. They started my mind on a journey about two birthdays we celebrate this month: George Washington and Abraham Lincoln. Though these two men are actual historical figures, with many documented accomplishments, a large part of their allure lies in the myths that have grown around them. 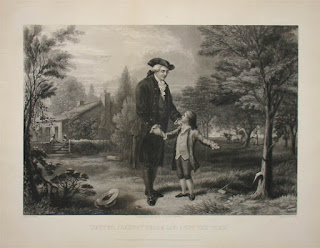 Perhaps the most well-known of these is George Washington's "I cannot tell a lie". Did he actually say that? No. The story first appeared in the fifth edition of Mason Locke Weems's biography, The Life of George Washington, published in 1806. Mr. Weems knew it wasn't factual when he included it in his book. He said that his plan was to tell Washington's history, then go on "to show that his unparalleled rise and elevation were due to his Great Virtues." I first heard the story when I was in elementary school (a very long time ago) and it's a pretty safe bet most of you did too. So, why is this little story, which most people know is not true, better known than most of the documented facts of our first president's life? Why has it lasted for more than two hundred years when many facts have been lost? It has the appeal of myth. It's a tangible example of the good we, as Americans, like to believe is the basis of our country.

What comes to mind when you think of Abraham Lincoln? If you're anything like me, first is a picture of his noble, craggy face. Next is an image of the log cabin in which he supposedly was born. While it is true that he was born in a log cabin, the actual cabin, much like Washington's cherry tree, is the stuff of myth. That humble little log cabin has become a symbol of that American icon: a man of humble beginnings, proof that if you work hard and follow your dreams, anything is possible. 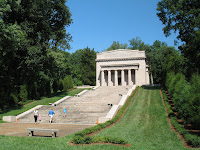 There is a tourist attraction representing the cabin but no one pretends it's the real thing. It's a facsimile and is enclosed inside a miniature Greek temple. One account I read described the temple as "pure and serene and utterly unrelated to the historical Lincoln". The temple has sixteen columns, representing the fact that Lincoln was our sixteenth president, and fifty-six steps representing the years of Lincoln's life. The closest they dare claim to authenticity was to say that there is a possibility that some of the logs might have come from the site of his actual birthplace. It other words, it's a symbol, a myth.

Does the fact that these stories are not true lessen their importance? I don't think so. They are part of our heritage, fantasies we have molded from fact to remind us who we are and what we aspire to be. They are stories to pass down through the generations in the hope that the values they represent will be an inspiration for our children and grandchildren, and, equally important, to ourselves.

February is for Fairy Tales

You know those popular holidays in February.  But you may not know about my new discovery, Fairy Tale Day is celebrated on February 26.

Many of us can remember the earliest stories that were read to us by family or teachers.  Some of them were scary—those with unkind lessons for bad decision-making.  Some were magical—those with fantastical characters and settings.  Either way, these tales were likely the first books we learned to read and they usually have happy endings.  It's no wonder we love them!

1.  Reacquaint yourself with your favorite childhood tales.  Pull them off your shelf or visit your library or bookstore.  Do you still have your original fairy tale books on your shelves?  Cuddle up with your beverage of choice and enjoy.

2.  Read to a child.  Your own or someone else's.  Get into the role and voice of each character. Muddy Days Blog has other great ideas to ignite the imaginations of youngsters on Fairy Tale Day.

3.  Watch a fairy tale movie.  Animated or live action, films such as The Princess Bride, Beauty and the Beast, or Mirror Mirror will be time well spent.  Don't forget the popcorn.

4.  Throw a fairy tale party.  Just add friends to any of the above ways to celebrate.  You can all dress up as fairy tale characters.

5.  Write your own fairy tale.  You knew this was coming.  Why not try your hand at a fairy tale based story?  Poets & Writers magazine offers tips.

Celebrate your way.  I'm wishing you your own happily ever after. 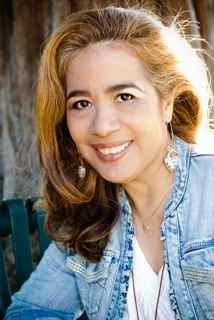 Victoria M. Johnson knew by the time she was ten that she wanted to be a writer.  She loves telling stories and she's happiest when creating new characters and new plots.  Avalon Books and Montlake Romance published Victoria's fiction debut, The Doctor’s Dilemma.  Her other fiction book is a collection of romance short stories titled, The Substitute Bride and a novella, Hot Hawaiian Christmas. She is also the writer and director of four short films and two micro documentaries.   Visit Victoria's website at http://VictoriaMJohnson.com for inspiration and tips and find her Amazon author page or connect with her on Pinterest and Twitter.

Several wise people have said that it is neither politicians nor warriors who shape a culture - it is the mythmakers, the creators of legends. In other words, it is us. The writers.

Laws might made by politicians and warriors, but the hearts and minds and beliefs of a people are created and fostered by the stories they read. For example, how many of our cultural beliefs have deep roots in legends and fairy tales? I think pretty much all of them. Even  the concept of a Happily Ever After comes from a legion of fairy tales all the way from Cinderella (the earliest known telling of which comes from the Old Kingdom of Ancient Egypt) to Nora Roberts and her fellow romance authors. The happy ending is by no means guaranteed in real life, yet we know we can always find one in a romance novel and that always makes us feel better.

It's the same with mystery novels. Some people wonder why, in this world of crazy behavior and rampant crime, anyone would voluntarily read a book in which fictional examples of the same take place. The answer is simple - because we know before we even open the book that justice will prevail. Not necessarily the law, I hasten to add, for the two are often not synonymous. When the novel is finished, the bad guys should be taken care of and societal balance not only returned but positively reaffirmed. If a writer is so injudicious as ignore this tradition, the backlash can be dangerous. Readers want their world tidied.

So how do you keep the ancient formula fresh? This was discussed on one of my writers' lists, and the answers were occasionally startling. Everything was suggested from reversing the sexes of the hero/heroine to putting the story on an alien planet with a bunch of non-human characters. All of these ideas had a certain viability that an experienced writer could pull off handily, but the discussion ignored the most important part... that the formula itself does not have to be freshened. The formula is a constant, no matter what costumes it wears.

It's the same with mysteries - there is a protagonist, there is a crime, the protagonist solves the crime incurring no little risk/danger to himself and in the end all things are resolved in a satisfactory way. Perhaps the real world may be going to hell in a handbasket, but within the pages of a mystery novel the reader knows that justice will always prevail.

Sometimes knowing how things will end is the most desirable thing. That's why formulas have always existed and always will.